The cast of the West Wing reunite to help out a political campaign. Hilarity ensues.

END_OF_DOCUMENT_TOKEN_TO_BE_REPLACED

Editing maestro Dylan Reeve has put together this fascinating split-screen behind-the-scenes look at how the Clinton speech was presented (incorporating a footage posted by Dave Weakly). Seriously, fascinating.

END_OF_DOCUMENT_TOKEN_TO_BE_REPLACED

Sibel Edmonds, the FBI translator who was fired for raising concerns about corruption, has now gone on the record in an interview in November’s American Conservative. Fortunately, time-traveling pixies have come back from next month and put the interview online.

GIRALDI: So the network starts with a person like Grossman in the State Department providing information that enables Turkish and Israeli intelligence officers to have access to people in Congress, who then provide classified information that winds up in the foreign embassies?

EDMONDS: Absolutely. And we also had Pentagon officials doing the same thing. We were looking at Richard Perle and Douglas Feith. They had a list of individuals in the Pentagon broken down by access to certain types of information. Some of them would be policy related, some of them would be weapons-technology related, some of them would be nuclear-related. Perle and Feith would provide the names of those Americans, officials in the Pentagon, to Grossman, together with highly sensitive personal information: this person is a closet gay; this person has a chronic gambling issue; this person is an alcoholic. The files on the American targets would contain things like the size of their mortgages or whether they were going through divorces. One Air Force major I remember was going through a really nasty divorce and a child custody fight. They detailed all different kinds of vulnerabilities.

GIRALDI: So they had access to their personnel files and also their security files and were illegally accessing this kind of information to give to foreign agents who exploited the vulnerabilities of these people to recruit them as sources of information?

EDMONDS: Yes. Some of those individuals on the list were also working for the RAND Corporation. RAND ended up becoming one of the prime targets for these foreign agents.

GIRALDI: RAND does highly classified research for the U.S. government. So they were setting up these people for recruitment as agents or as agents of influence?

Swensson was a tall man with a long, earnest face. The sole proprietor of a computer store in the suburbs of Atlanta, he told me he was just a regular John McCain supporter – pro-choice, not very religious, working on his third marriage – until he discovered on the Internet that the government was lying about the oil crisis. There was plenty of oil, but they just didn’t drill for it because of environmentalists and their spotted owls. Eventually, that led him to the “birther” movement.

Swensson was an amiable guy. I liked him. He told me about growing up in Florida, poking around lagoons with his dad and marveling at all the beautiful coral fish. But now his father was dead and the ocean off the Florida coast was like I-95 and it all felt like the end. Obama was breaking the bank. Soon China would stop buying T-bills. Food shortages were sure to follow. He expected martial law by September.

Esquire’s Richardson Report takes a look at the birth of the “birther” movement in the first part of a series on what he seems to consider quite a concerning trend in America.

ReadWriteWeb have posted a little analysis of Obama’s inaugural speech by running it through Wordle to create a word cloud. On RWW, you can compare it to Bush’s speech upon re-election four years ago, some Clinton, Reagan and Lincoln. But here is just the Obama word cloud: 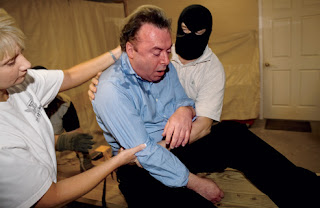 Christopher Hitchens has changed his tune on whether or not waterboarding is torture – after trying it out for himself.

As if detecting my misery and shame, one of my interrogators comfortingly said, â€œAny time is a long time when youâ€™re breathing water.â€ I could have hugged him for saying so, and just then I was hit with a ghastly sense of the sadomasochistic dimension that underlies the relationship between the torturer and the tortured. I apply the Abraham Lincoln test for moral casuistry: â€œIf slavery is not wrong, nothing is wrong.â€ Well, then, if waterboarding does not constitute torture, then there is no such thing as torture.

Pick up the August issue of Vanity Fair, read the article and you can even watch the video. 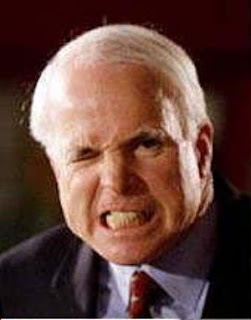 Kum Fac’e
If the World Could Vote is one of those sites that tell us what everyone supposedly already knows. In this case, it’s that the whole world would rather have Obama as president of the US than have McCain. It’s not a new trend. After the 2004 election, there was a spate of sites featuring Americans apologising to the rest of the world for the results. There was even a bag company that included an apology in their exports to France.

In general, the developed world is to the left of US politics. Up and to the left, if you add an axis representing, say, literacy or education. And you’d expect New Zealand to follow that same trend. But here’s the curious thing. New Zealand is one of the few countries that favour McCain over Obama.

In his, we join Thailand (96% McCain), Venezuela (100% McCain) and Kenya at 100% McCain, which presumably says more about Venezuelans and Kenyans who have the money to afford a computer that anything else.

And that’s it. Human-rights paradises Israel and Indonesia are split down the middle. Israel’s split probably shows, more than anything, the level of education of Israelis, as they’ve apparently seen through the Republican spin that Obama wants to single-handedly destroy their country. Haaretz, a particularly good Israeli newspaper, commented on this even before Obama had finalised the nomination, in an interesting editorial. Probably more on that later, as the Obama smears are downright fascinating (as is Obama’s response to them.)

So, why are online Kiwis more in favour of McCain than Obama? It’s not a huge majority – 55% – but it stands out in contrast against the votes of other Western countries (Australia around 90% Obama, UK 92% Obama, etc.) Any simple answer is likely to be simplistic, but there has to be something to explain the anomaly. I doubt it’s a matter of racism, since our neighbourly International Home of Racism is sitting at 90% Obama.

I’m not going to speculate on it further – I’m more likely to chat about it on Thursday’s Wire show on bFM, around 1.30pm. But someone with their finger more firmly on the pulse might have some suggestions. 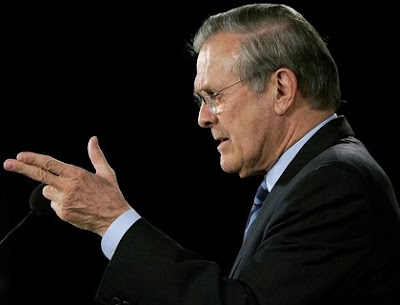 Towards the end of his time in government, Secretary of War Donald Rumsfeld had a chat about Iraq with military analysts about basically how bad things were going. A recent mass Freedom of Information Act application managed to get thousands of documents and audio files from the Pentagon, and so we can listen to the whole damn thing if we want to.

Fortunately, Newsvine’s jfxgillis has gone through and pulled out some of the more interesting clips, along with his own analysis. You can read his commentary and hear the clips at Liquid Lunch with Donald Rumsfeld. Here’s an excerpt:

…the questioner prods him back on topic by asking, “Politically, what are the challenges because you’re not going to have a lot of sympathetic ears up there [on Capitol Hill]?”

Rumsfeld’s answer is nothing short of stunning. No, not the part where he claims Bush is a “Victim of his success.” That’s just stupid. And no, after hearing his previous insult to the American public, his condemnation of us because “we don’t have the maturity” to recognize the threat of terrorism–the further we get from 9/11, the less and less… he trails off. But that’s not shocking, nor is his doomsday scenario, all things considered.

So let’s summarize. According to Rumsfeld and his media sycophants, America has real problems: We’re weak-willed, we’re immature, we’re forgetting what happened, and oh my God, we’ve elected Democrats to Congress. So, what’s the “Correction” for those problems? Listen to him: 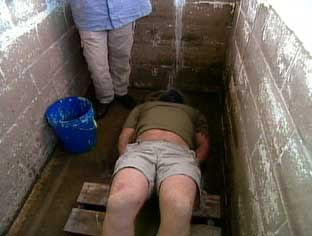 Here’s a curious thing. Scylla, at the Straight Dope message board, decided to try waterboarding himself to see what the fuss is all about. For those who don’t know, waterboarding is an interrogation technique used by American intelligence on detainees. It simulates the sensation of drowning without actually drowning you, triggering the Fuck I’m Gonna Die reflex.

Read Scylla’s report here. (Note: For some reason, today – 14 May 2014 – Google Safebrowsing has pinged the Straight Dope message boards as a potential hazard. Click at your own risk.)