Continuing with the theme of posting videos until I have time to write something more substantial, check this out.

The Yes Men (posted on previously) have a new film coming out, and it looks like it’s going to fucking rule.

END_OF_DOCUMENT_TOKEN_TO_BE_REPLACED

It was too late to step back. I now can appreciate why the astronomer turns relentlessly to the telescope. I was probing deeper and deeper into my own perceptions and the motivations for group and individual action. There was much more to see and try to understand. Many questions haunted me. Why did the students accept the authority I was imposing? Where is their curiosity or resistance to this marshal behavior. When and how will this end?

In 1967, only two decades after World War II, teacher Ron Jones was having trouble convincing his students that the German people would go along with the Nazi regime. To make his point, he started The Third Wave – an experiment in practical fascism that quickly got out of hand. His account of the week he’d rather forget makes compelling reading.

Please, please, no more requests for a post explaining how to make friends on the telephone. This was sorted out years ago. I was appalled to learn that my own phone-using technique is 1/20 as good as example A.

In different countries, people speak different languages. That includes onomatapoeia, as I learned in high-school Japanese. Apparently dogs go, “Wan! Wan!” Stupid Japanese people. Dogs go, “Woof! Woof!” This is why you lost the war. NationMaster (which is pretty cool) has a list of different onomatapoeia from around the world for the sound a cock makes. Cock.

The list is below, but that’s not the point of this post. I have found something very much cooler. Quack Project has mp3s of little kids from around the world doing their locally flavoured impression of farm-animal noises. In addition to being fascinating, it is also four times as cute as a button. And it’s not just the language filters on the ears. Animals, like cows and birds, actually have different accents depending on where they’re from.

END_OF_DOCUMENT_TOKEN_TO_BE_REPLACED

Contexts magazine is a sociological read published by the University of Minnesota. Yep. So, anyway, what I found interesting was their Seeing is Believing blog. The focus is on how imagery, generally in advertising, can subtly (or not) adoptÂ  and reinforce certain mindsets. The post that got my attention was “rapists as hyper-conformists“. Reminds me a little of a beer ad I saw in a bathroom at a pub in Christchurch. The brand of beer was, if I recall correctly, something like “Bich” or something – something that looked like it was pronounced “bitch”. The ad itself was a big-breasted blonde chick with an expression on her face that implied she was drugged, bending over towards the camera, and the copy read, “Nothing goes down like a Bich.” The Seeing is Believing blog also points out some pretty disturbing sexualisation of children.

NY Mag has published a very interesting article about the burgeoning autism-rights movement. What began as a response to a call for more parental awareness of the “disability” has become an organised collection of autistic and Asperger’s people arguing that they are literally differently abled rather than dis-abled. In a manner similar to the attitudes of many in the deaf community, they see autistic children as partakers in an autistic identity, rather than children who suffer from autism.

END_OF_DOCUMENT_TOKEN_TO_BE_REPLACED

So it happens again. The situation in Israel-Palestine dominates my thoughts, just as it dominates news media and political arguments online. That last one shouldn’t be a surprise – the internet is an ideological battleground, and all kinds of people realise it. Fascinating how quickly a tool for massive dissemination of information has become equally a tool for dissemination of propaganda. So much so that I feel a strange relativism come over me. Massacre, defence; Zionism, Islamism; callous slaughter, morally upright surgical operation; another naqba for the Palestinian Arabs, another shoah for the Israeli Jews. Right, wrong. Who’s to say?

END_OF_DOCUMENT_TOKEN_TO_BE_REPLACED 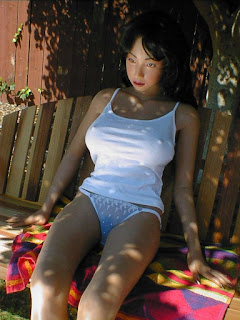 I’m watching a documentary (it’ll screen on TV2 on Wednesday, 27th of Feb) about Real Dolls and the people who love them. Now, I normally enjoy being scared. It doesn’t happen often, in terms of movies and books, but when it happens, I love it. And this documentary is terrifying me.

These people, who have – or believe themselves to be having – serious relationships with these inanimate objects… And they’re creepy as fuck, of course. Very much about Masahiro Mori’s uncanny valley. They’re creepy by themselves, but what’s genuinely terrifying me is the guys who love them.

It’s not just about sex for them. The dolls aren’t purely masturbatory aids. They’re replacements for actual human contact in guys who don’t want to have to deal with women, or feel incapable of dealing with women. Listen: “They don’t react at all. But if you don’t mind that, they’re good fun. They’re certainly better than going without any female company at all.” Listen: “Especially, like, in the really early daylight, just being able to see her, you know, looking at me, regarding me, that sort of thing, and me doing the same back.”

Okay, it’s less unsettling now that I’m writing about it. But it was just that moment of mental vertigo, you know? That point where your mind takes a peek at what it thought was solid ground and finds itself over a sheer drop into utterly alien territory. People can love things.

The geometry is all wrong.