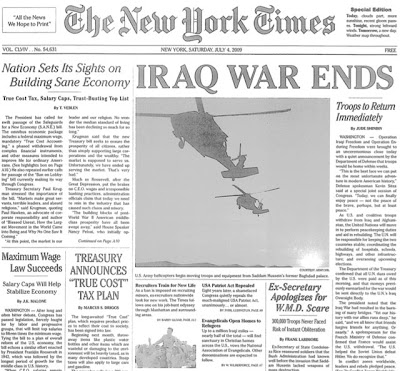 Anti-consumerist anarchists The Yes Men have done it again, distributing a fake New York Times to New Yorkers this morning, with a sample of what they’d like to see in the news on July 4th next year.

Gothamist has a very comprehensive look, with some sweet videos. And a hat tip to Disinfo.

The Yes Men have previously pulled such stunts as posing as Dow Chemicals spokespeople on the BBC, declaring that Dow would be taking full responsibility for the Union Carbide chemical disaster that devastated the town of Bhopal, paying for medical bills and compensation. This forced Dow to come out and officially say that they would be doing nothing of the sort.

Could it be that, knowing this prank would renew interest in the team, they asked the site to remove their film, so that they could benefit from the increased sales? Come on, guys. Where’s the anti-consumerism?