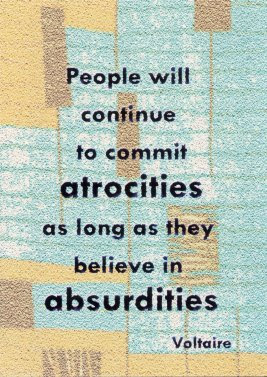 Sensing Murder is a presumably popular television show here in New Zealand. That means that people watch it, so advertisers pay TVNZ, so TVNZ pays the production company, so the production company pays its employees and the ‘psychics’ featured. The idea is fairly simple – take an unsolved murder, list the known evidence, bring in psychics to tell us the known evidence again, and then make a few suggestions as to what might have happened.

Now, the show does serve one good function – one mentioned recently on Shortland Street (come on, you all watch it). By bringing the public’s attention to these unsolved murders, it’s possible to jog viewers’ memories and they might contact the police with useful information. The fact that the same function can be fulfilled without encouraging ignorance and stupidity – such as with The Investigator – removes this justification.

The show claims that, having tested almost 200 psychics with a little-known solved murder case, a select few are found to participate. We are then assured that the psychics are told nothing of the unsolved case, don’t know what they’re working on till they arrive at the production office, aren’t given any cues by the crew, and that therefore their melodramatic conversations with dead victims are real.

As my good friend James says, “He either walked up the stairs or teleported to the top of the building, and he didn’t walk up the stairs.” Which is more likely? That the creators of the show are lying to you, or that these people are actually communicating with dead people.

The victims’ families are often understandably eager to believe, with many tears and such. Whether such false hopes are further victimisation or compassionate white lies, I’m not decided.

Knowing how many sceptics there are out there, one recent episode included self-promoting author Nigel Latta, claiming to be a sceptic himself, then being totally amazed by how totally real the show that’s paying him to appear on television is.

Alan Charman of Immortality.co.nz has made a very compassionate offer to the show and its four featured psychics. The Immortality Challenge makes a small demand for a big payout. All any of the psychics must do is exactly what they do on the show, except under controlled conditions: prove they are communicating with dead people. Once they’ve done so, they will receive far more than Sensing Murder pays them – $1,000,000 for themselves and $1,000,000 for their chosen charity. The offer to the Sensing Murder psychics is being discussed on racechat.co.nz.

DB: Who am I talking to?

Me: [keeping it friendly] You don’t sound all that pleased to hear from me?

DB: [poise quickly recovered] Quite happy to talk, but I’m rushing off to a meeting. Can I call you back in an hour?

Me: [not asking why the hell you’d ring someone if you couldn’t talk to them] No problem, look forward to hearing from you.

This television show is making people stupider, but unlike productions from, say, Touchdown, they are making people stupider in a way that could be easily removed with a little honest experiment – like the Immortality Challenge. It’s much harder to prove that Mitre 10 Dream Home is a scam.

Sensing Murder can be contacted through their website, or by phoning Ninox Films Ltd in Wellington, if you feel like asking them why they’re not giving $1,000,000 to child cancer or something.