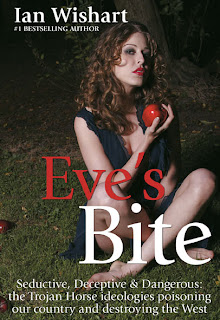 I’ve been doing some things, and one of the things I’ve been doing is reading a book that was lent to me for a browse. It’s called Eve’s Bite, by Christian and former journalist Ian Wishart.

It’s pretty funny. According to the introduction, the gist is this: the West is at war with (Nazis) Islamofascism, which is (Nazis) going to win, because (Nazis) political correctness and Marxist (Nazis) ideologies have made us weak. This weakness is exemplified by the Labour Party (Nazis).

Eve’s Bite is subtitled, “Seductive, Deceptive & Dangerous: the Trojan ideologies poisoning our country and destroying the West.” I have a better subtitle: “Why critical thinking should be taught in high schools.”

I do the following for two reasons. One, it’s entertaining. Two, I’m bored..

This chapter begins a Goebbels quote about propaganda and education. Wishart is concerned about education in the West. He begins with a few statistics – how many students didn’t know much about D-Day or the Holocaust, thought that Private Ryan led the charge at Normandy, etc. A survey of British adults found that one in 20 believe Conan the Barbarian to be a real figure from Nordic history.

In parentheses, he points out that this is roughly how many New Zealanders voted for the Greens in the last election. Now, I’m a big fan of Vonnegut, and at the start of Breakfast of Champions, he prepares the reader for the level of sophistication he will be using throughout the book. “This,” he says, “is my drawing of an asshole.”

I like to think of this parenthetical comparison of Greens voters with Conan-believing Britons as preparing the reader for the level of sophistication Wishart will be using throughout Eve’s Bite. Perhaps he’s hoping the reader will think of the Greens when they think about studies about how silly some people are. Perhaps you’ll think of Vonnegut’s asshole when you think of Ian Wishart. Who knows?

To explain how education has reached the depths of contemporary New Zealand, Wishart explains the three main historical forces at work in shaping the modern Western world: Darwinism, Marxism and eugenics.

The Wishartian Marx was a man on a mission: to destroy Christianity. He quotes Marx.

When Engels and I first joined the secret Communist Society we made it a condition that everything tending to encourage superstitious belief in authority was to be removed from the statutes. Law, morality, religion are to him so many bourgeois prejudices, behind which lurk in ambush just as many bourgeois interests.

Communism abolishes eternal truths, it abolishes all religion and all morality.

Goodness! And from Wikiquote. Let’s look at where these quotes actually come from. Yes, that’s right, quotes – plural. The first sentence is from a letter Marx wrote to Wilhelm Blos, recommending avoiding personality cults in socialist movements. The second sentence is from the Communist Manifesto, describing the condition of the proletarian under capitalism.

And the third quote. This is my favourite part. “Communism abolishes eternal truths, it abolishes all religion and all morality.” Good God! How terrifying! Why would Marx say something like this? Unless… Yes, here is the full quote:

“Undoubtedly,” it will be said, “religious, moral, philosophical, and juridical ideas have been modified in the course of historical development. But religion, morality, philosophy, political science, and law, constantly survived this change.

“There are, besides, eternal truths, such as Freedom, Justice, etc., that are common to all states of society. But Communism abolishes eternal truths, it abolishes all religion, and all morality, instead of constituting them on a new basis; it therefore acts in contradiction to all past historical experience.”

What does this accusation reduce itself to? The history of all past society has consisted in the development of class antagonisms, antagonisms that assumed different forms at different epochs.

Yes, that’s right. Wishart quoted Marx musing on what opponents of Marxism might mistakenly say about Communism. It was not Marx saying that Communism abolishes all morality, but Marx’s hypothetical critics and name-callers.

But so important! Wishart follows up the misquote with, “Let that message sink in, for a moment.” Wow.

I think I’m just going to throw in that picture whenever these hilarious little associations are made. Marxism… equals… Islamic terrorism…

Then Darwin comes in. Wishart’s right in associating the two, though not really in the way he means. Darwin sought a materialist explanation for the diversity and complexity of life on earth. Marx was applying Hegel’s teleology to a material economic context, rather than Hegel’s spiritual one. So they were both materialists.

Now, keep in mind what Marxists’ actual problem with religion was: it made people lazy. It kept them quiet and accepting of social injustice by promising a blissful world after death. (JUST LIKE MUSLIMS OMG.) It didn’t really occur to him that religion could be a force for positive social change, because his society had seen so much of it being used to maintain an unjust status quo. This is why Christian Marxists exist – because religion isn’t always an opiate. Sometimes it’s an amphetamine.

Wishart also talks about Darwin’s “survival of the fittest” appealing to Marxists, which is just plain odd. Which part of “from each according to his means, to each according to his needs” sounds like survival of the fittest? If anything, it’s under capitalism that the “fittest” are encouraged the flourish at the expense of those who, say, can’t afford expensive healthcare.

The general gist of the chapter is this: Marx hated Christianity and saw Darwinism as a weapon against it. Marx also argued that controlling education is a first step to indoctrinating the people with Marxist ideals. Despite failing at everything else in life (including his marriage and personal finances), he succeeded in planting the Trojan Horse of Marxist ideology in Western education. That is why New Zealand children are taught about feminism and not about D-Day.

The assertion that someone who failed so spectacularly (Marx) got his revenge by planting the seeds of a culture’s destruction is reminiscent of Nietzsche’s On the Genealogy of Morals, referring to Christian “slave morality” being the revenge of the Jews on the Rome that destroyed them.

Did I just associate Wishart with an anti-Semitic interpretation of Nietzsche?