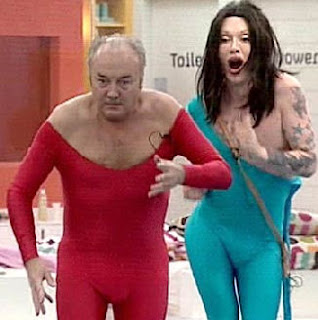 “Senator, I am not now, nor have I ever been, an oil trader,
and neither has anyone on my behalf.”

I didn’t expect to see so many people at Galloway’s speech last night. The hall at Auckland Girls’ Grammar was packed out with a variety of people, from Muslim New Zealanders of different flavours to activists to politicians to just interested non-Muslim Kiwis. I suppose I don’t know what I was expecting – a small cosy discussion panel. Anyway, I was wrong.

Then he ended up on Celebrity Big Brother. Huh.

The event was organised by the Federation of Islamic Associations of New Zealand, along with Residents Action Movement, a growing socialist Auckland City Council faction. Ostensibly, RAM/FIANZ was responding to the “Mosques and Miracles” conference tour of New Zealand by Australian evangelical speakers/writers Stuart Robinson and Daniel Shayesteh. The tour, organised by Vision Network of New Zealand, was apparently mostly closed to the public – a point that probably seems a bit more sinister than it is.

Both Shayesteh and Robinson are former Muslims, now converted to evangelical Christianity. Their fervour for demonising their ex-religion and promoting their newfound serotonin is no real surprise. Converts later in life are almost always more fanatical than those who grew up with their religion, partly because their conversion is a significant life-altering event for them, and partly because their old beliefs seem all the more evil to them due to the contrast.

The same is true, for example, of Christians-turned-Wiccans. Any number of times I have heard from such a person, “The Bible tells people to… <insert atrocity here>” Converts always feel especially authoritative in criticising the religion of their past, or lack thereof. The difference is that few have a massive and wealthy support structure through which to voice their zeal, like that of the evangelical Christians.

One could be forgiven for wondering if excerpts from Robinson’s book Mosques and Miracles, quoted by RAM organiser Grant Morgan, have been taken out of context. However, it’s hard to imagine what kind of context would render intelligible such utterances as, “Muslims always build mosques on mountainsides… [as] places to retreat when they have destroyed the surrounding cities.” Giving the benefit of the doubt, one might hope the comment was prefaced with, “I once heard a fucking retard say…”

Galloway is a talented orator, and while points of substance were scattered amongst standard left-wing crowd-pleasing platitudes (“Real Christians believe in the Prophets, these guys believe in the profits!” – cue laughter, applause), I found myself more appreciative of Paul Buchanan’s succinct words. With little trace on his face of the unpleasant week he’s had (fired from his lecturing position, commence conspiracy theories at your leisure), Buchanan noted simply and clearly that we are far more at risk of a tsunami than a terrorist attack in New Zealand. He did say, and others echoed him, that the long path to sectarian violence in New Zealand begins with suspicion and fear of the Vision Network variety, and all speakers were clear: it’s not a first step we should take.

Grant Morgan had the misfortune of appearing alongside skilled and experienced speakers, though his good nature shone through any lack of oratorical proficiency. I found his points a little confused, though. He expressed a concern that evangelical Christian networks were inventing or exaggerating “the Muslim threat” for political gain. We all applauded when he said that only around 30 people turned up at the Wellington evangelical meeting – that most Kiwis don’t want a bar of that nonsense. And then he proclaimed the virtues of Residents Action Movement and its commitment to multicultural diversity in the upcoming council elections. Now, I’m no genius, but couldn’t organising a popular international speaker in response to an admittedly tiny group of anti-Islamic nutters with RAM flyers everywhere in the lead-up to a council election be considered to be inventing or exaggerating a threat for political gain?

Someone from the audience near the front seemed to think so; though, given his rudeness in yelling out to interrupt Morgan, I’d like to think he hadn’t thought about it as much as I just did. “You’re fearmongering!” called the man, and Grant Morgan addressed the point quite politely before continuing. The point, though, I think remains.

It would be a bit more a point if RAM didn’t have several other strong campaign platforms, not the least of which is public transport and climate change in Auckland. They are hardly a one-item voucher.

Christians versus Muslims isn’t a concern for me, theologically speaking. I’m not inclined to pay attention to people arguing over the colour of Santa Claus’s socks. But religious freedom – both institutionally and societally – is a value I hold dear.

Basically, fuck off, Aussie evangelical preachers. Here in New Zealand, we don’t think it’s “cool” to be a “cunt” to people.