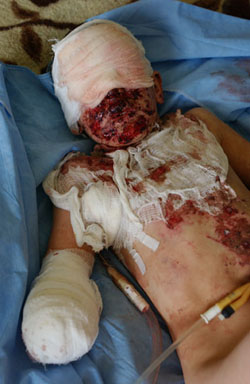 9-year-old Arkin is fed his democracy through a tube.

34,452 is three Mosgiels of people. I have tended to measure large numbers of people in Mosgiels since an early age. There are 10,000 people in a Mosgiel. Roughly. Give or take. Anyway, that’s an awful lot of civilians to have died last year in Iraq. Who should be surprised by this, I don’t know. Given that the popular justification for invading Iraq has, since the invasion began, focused on how awful Saddam Hussein was and how he was basically just slaughtering Iraqis any chance he got, anyone who thinks the invasion was a good idea now borders on the religiously fanatical.

Interested to see what the zealous spin is on the matter, I tried to check out Little Green Footballs, which seems to be offline. Aww. So I checked out Political Crossfire, and no one was talking about it there. Getting worried, I finally checked Christian Forums. Ahh, here we are. BearerBob says, “Trust the UN? I think not!” But then, he’s always saying that, because the UN is a communist anti-Christian satanist nihilist feminist liberal conspiracy.

That said, Bob was talking about bribery charges in the so-called Oil for Food Scandal. Here’s my favourite part: “[U.S. attorney Michael] Garcia said the United States had issued warrants for the arrest of Nadler and Sevan and will seek their arrest and extradition to New York.” Yeah? Is the US down with extradition now? Excellent. I look forward to a certain CIA terrorist being extradited to Venezuela.

On a bizarre personal note, the unique ID for the javascript in the image above is 1701071 – the only palindromic unique ID until… Oh, wait. There’ll be another one in 10 days. Never mind.